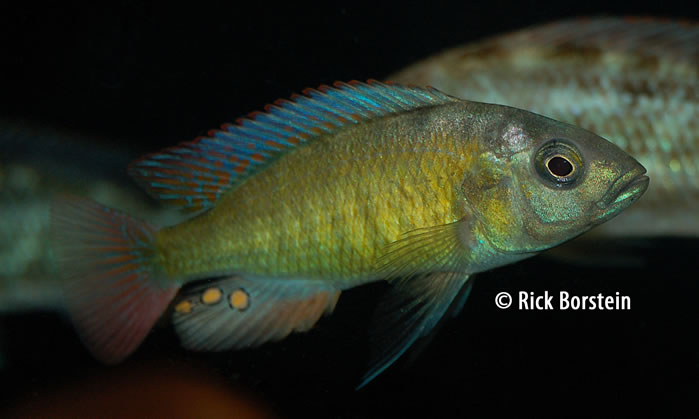 Astatotilapia sp. "44" is a polygamous mouthbrooding cichlid from Lake Victoria, Africa. I believe it was first imported to the United States sometime around 1995.

Adding to the confusion, is the varying coloration of images found on the web. I can only describe my individuals. Males exhibit an overall tan-green cast and a red tail. A blue-grey cast is found in the dorsal. When courting, the male exhibits a distinct barred pattern. Astatotilapia sp. "44" can change appearance and pattern rapidly.

Astatotilapia sp. "44" is found at the shoreline in shallow water.

Astatotilapia sp. "44" is easy to keep. Water temperatures of 76F to 80F and regular partial water changes are appreciated. I kept my fish in regular (hard) Chicago tap water.

Like other Victorian cichlids, aggression is something to consider. My young breeders were not overly aggressive, but I have hard reports that large, older males can get a bit nasty. I suggest at least a three foot long tank with caves, rocks and cover to be on the safe side.

Astatotilapia sp. "44" like many Victorian haps, is not difficult to breed.

I obtained a trio of fish from my son Sam who had originally purchased young fish at one of GCCA's BAP auctions. Like many Victorians, they will breed young. It isn't unusual to find a small 1.25" female holding.

At any rate, I unceremoniously dumped the trio in to a 125G tank housing ten Nimbochromis linni and five Archocentrus myrnae. The new introductions were ignored by the original tank inhabitants for the most part. This 125G had a sand substrate and was decorated with terracotta caves and flowerpots. Filtration was provided by a large wet/dry filter.

From time to time, I saw the male color up. At these times, the red tail became bright and vertical stripes appeared on the flanks.

Within a couple of weeks, I found a female holding. Victorian Haps are almost always excellent holders and the female Astatotilapia sp. "44" was no exception. About twenty days post spawning, I stripped the female of sixteen fully formed fry.

The fry were immediately able to take live, baby brine shrimp and were easy to raise in a five gallon growout tank.

I have occasionally seen Astatotilapia sp. "44" at pet shops and it is rarely expensive. Juveniles go for about $6-8 per fish.

Astatotilapia sp. "44" isn't difficult to find. Chicago-area hobbyists should place a free Wanted ad on GCCA's Cichlid Classifieds. There always seems to be somebody in our club with these fish.