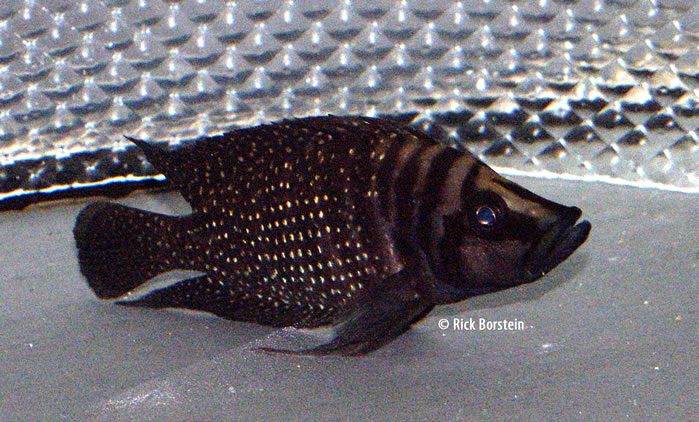 Above A 3-inch Altolamprologus calvus male. Photo by Rick Borstein

Altolamprologus calvus is a recently discovered Tanganyikan fish, first typed by Poll in 1988. This slender predator's unique compressed shape and somewhat menacing appearance has made it a popular fish for cichlid enthusiasts.

While not difficult to keep, Altolamprologus calvus can be a challenge to breed for the novice. This is a very slow-growing species; allow at least two years to get them from a one-inch size to your first spawn. Additionally, this fish requires a unique spawning area.

A number of color variants of Altolamprologus calvus are available in the hobby. The most popular, the "black" variety (sometimes called Pearly) is pictured above. Other varieties include white and orange. I have also heard of a zebra type, but have not personally seen it.

Altolamprologus calvus is always found in association with rocky areas, particulary the reef-like structures in the lake.

Altolamprologus calvus can easily be kept in a 15-20 gallon tank and is not aggressive towards con-specifics. Like all Tanganyikans, it appreciates hard, clean water. I kept mine in Chicago water and made no chemical changes.

I performed weekly, 50% water changes during my grow-out stage with no problems. Altolamprologus calvus can be sensitive to abrupt temperature changes, so make sure that your replacement water is consistent with what is in the tank. I kept my fish at 78F.

Altolamprologus calvus is a specialized predator, feeding on eggs, fry and young fish on the reef. The laterally compressed body of this fish allow it to penetrate tight crevaces and extract their prey hiding within. The large mouth is rapidly opened and the enormous suction produced draws in the prey forcefully.

Fortunately, in the aquarium, they will take a variety of high-protein foods. I fed brine shrimp and earthworm flakes, New Life Spectrum and Aquadyne duraflakes.

Don't get frustrated if your fish do not grow quickly; this species just doesn't get big fast!

Altolamprologus calvus isn't hard to breed, but you do need to make sure your fish are sexually mature and have the right place to lay eggs. While they are growing, you can keep

You can sex Altolamprologus calvus by size. Males are about one-third larger than females. I suggest starting with four to five fry or juvenile fish and growing them up in a twenty-gallon tank.

Altolamprologus calvus likes to spawn in tight confines. In one of Pam Chin's columns, she recommended using shells. However, GCCA members who has successfully spawned this fish recommend Boester Bells named after Rick and Monica Boester who have sold many of these for breeding dwarf bristlenose plecos. These tapered, ceramic cones seem to appeal to the fish and worked for great for me.

The female will stay inside fanning the eggs and protecting them while the male patrols outside. They are very good parents.

It's certainly possible to raise the fry in the parent tank, but I removed the Boester Bell one week post-hatch when the fry were are almost free swimming to a five gallon grow-out tank containing gravel and a seasoned sponge filter.

The fry of Altolamprologus calvus are bottom huggers. For this reason, you will need to pay extra attention to water quality as extra food can quickly foul the substrate. I fed a mixture of Cyclops-eeze, Hikari First Start, and finely ground earthworm and brine shrimp flakes.

At one month, the tan fry develop some striping. At two months of age, my largest fry is one-half inch long and the body shape is beginning to approximate that of the parents.

Expect to hold the fry for nine months or more to get them to a saleable size of one inch.

Altolamprologus calvus is occasionally available at pet shops that specialize in cichlids. It is readily available from wholesalers, however, so ask your shop to order for some for you.

This fish is generally available at GCCA Swap Meets and Auctions and I've seen it every year at our annual convention, the Cichlid Classic. Consider placing a free "Wanted" ad in the Classifieds section of our web site to find some from a local breeder.