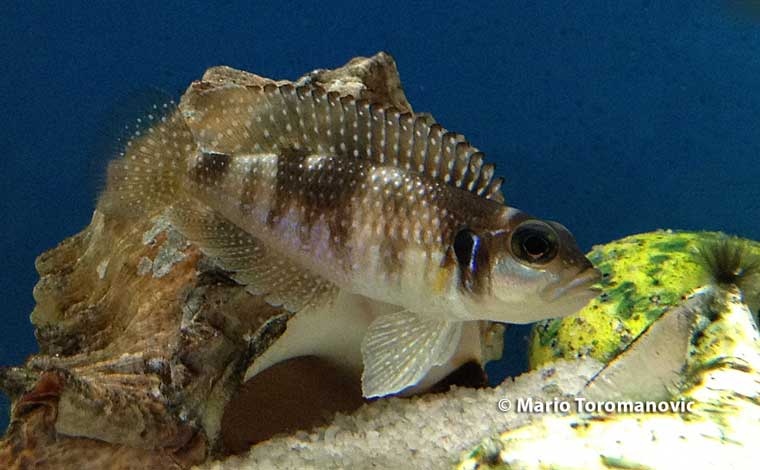 Above Lamprologus meleagris Male. Photo by Mario Toromanovic. Video below.

Lamprologus meleagris is substrate-spawning shell dweller found in Lake Tanganyika in Central Congo  coast south of Kalemie. This fish has a grey body with brown splotches along its flanks. The underside can also show tinges of purple and there is a touch of a blue near the mouth. The flanks are speckled with a scattering of pearly spots which gives them their common name Pearly Ocellatus. Females are slightly smaller than the males and their colors are not as intense.

The following is an exact quote from the book Tanganyikan Cichlids in their Natural Habitat by Ad Konings:
"When Buscher (1991) described L. meleagris he pointed out that it differed very little from L. stappersi, but that type locality of the latter species was about 100 km further north of L. meleagris, which at that time, was known only from the near Bwassa (65 km south of Moba).  Later he also recorded L. meleagris from Kalemie, where it was found in the river mouth (Buscher, 1998).  The holotype of L. stappersi was collected near Mpala, in or near a river.  This locality lies between Moba and Kalemie, and it seems very unlikely that such similar forms, both found on muddy bottoms near river mouths, are not conspecific.  Although it is agreed that L. stappersi was initially poorly described, Buscher has re-described this species, and there is no doubt that L. meleagris is synonymous with L. stappersi, originally described by Pellegrin in 1927."

Lamprologus meleagris is not difficult to care for, assuming you can provide suitable water quality.  Because of their size ( up to 2.5 inches, females are bit smaller ) they don’t require large tanks. I kept two pairs in ten gallon tank. It is important to provide plenty of empty shells and a fine sand substrate is appreciated since they this fish loves to dig. I performed 30% water changes in their tank every four days. Tank temperature was maintained at 79° and pH of 7.6..

Lamprologus meleagris  is found on the coastline over sandy areas in and near empty snail shells. Lake Tanganyika has very hard and alkaline water— pH range of 7.5 to 8.0 and a dH range of 12.0 to 15.0.

The first signs of breeding behavior in my Lamprologus meleagris occurred when one of the females began cleaning an empty shell. During this time, the male hovered nearby making sure no other fish came close. Soon thereafter, the female almost completely buried the shell in the sand, leaving only narrow opening.

Spawning for Lamprologus meleagris is a secretive affair and I didn't even realize that it had actually taken place. Over the next ten to twelve days, the female closely guarded the shell while the male stayed close by. Since these fish are secretive cave spawners, you won’t know when the larvae have hatched. For this reason, I fed live baby brine shrimp from the first signs of breeding on.

Evenutally, I noticed a whole bunch of small fry hanging at the mouth of the shell, retreating back inside as soon as I would come close. The fry had reddish-brown splotches across their body much like the adults. I made sure there was plenty of newly hatched baby brine shrimp at every feeding.

I left babies in parents care for almost a month, before I moved them in their own tank for grow out.

Lamprologus meleagris is common in the hobby and often available at GCCA auctions or events.

You will also find Lamprologus meleagris at better pet stores and from a number of wholesalers on the web. 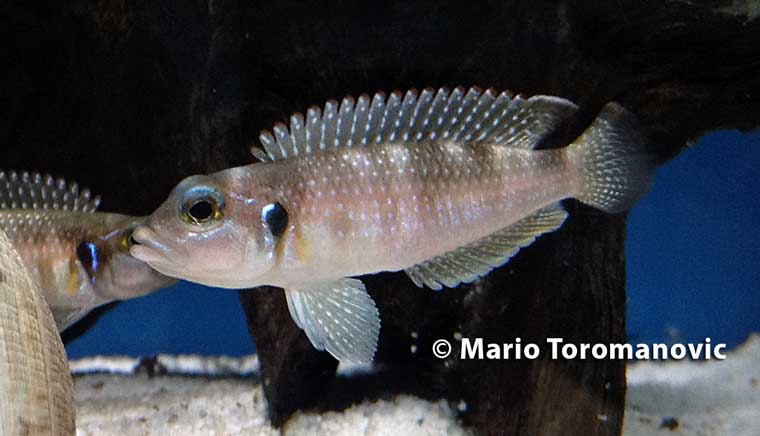