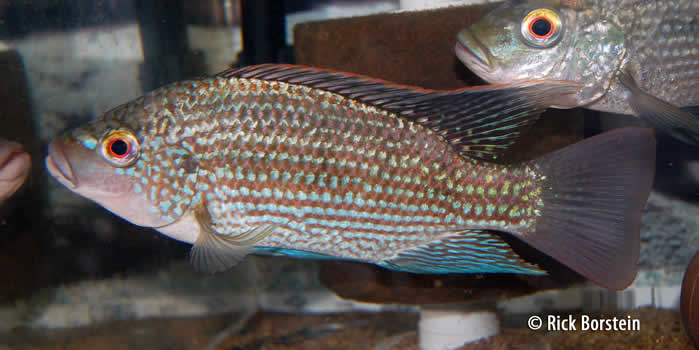 Oreochromis tanganicae is mouthbrooding Tilapiane cichlid from Lake Tanganyika in Africa. This fish was first identified by Günther way back in 1894. This is a large, robust cichlid with a huge appetite and, interestingly, is the only Tilapiane cichlid found in the lake.

Book-loving cichlid hobbyists were drawn to Oreochromis tanganicae by the superb photograph of the fish on page 253 of the first edition of Ad Koning's seminal work Tanganyikan Cichlids in their Natural Habitat. In the photo, a native is holding up huge Oreochromis tanganicae in two hands! Males of the species may easily exceed sixteen inches. I would expect females to max out a bit smaller.

Oreochromis tanganicae is found among many different habitats in Lake Tanganyika.

Oreochromis tanganicae presents a few challenges. You must have a big tank since this fish not only gets very big, it gets very big quickly. Hungry all of the time, this fish produces copious amounts of waste. Large, frequent water changes are critical. Temperature ranges of 76F to 80F are recommended. I kept my fish in regular Chicago water (hard) with no problems. My guess is that neutral to very hard water would be tolerated easily by Oreochromis tanganicae.

In the wild, Oreochromis tanganicae is primarily herbivorous, feeding on algae and diatoms grazed from the rocks in the lake. In the aquarium, it is not a picky eater. I fed Tetra Cichlid Sticks, Extreme Pellets, Dainichi Veggie Deluxe and other large pellets for the adult group I kept.

Several years ago, a group of GCCA members brought in some juvenile Oreochromis tanganicae. There was a lot of interest at the time and much exclamation over the aforementioned photo from Konings' book. Soon, a group of the fish arrived in Chicago and were distributed to several members. Some members had success with the fish, but for others, unfortunately, aggression loomed and some hobbyists were left with only a single fish.

Story of the cichlid hobby, but I digress . . .

In late mid-August, I obtained seven Oreochromis tanganicae from fellow GCCA member Mike Helford. At the time, the largest of the group was about seven inches and Mike had successfully bred the fish.

I placed the group in a 75 long tank which was filtered by three, large ATI sponge filters. This tank had a sand substrate and was maintained at 79F. I performed water changes twice a week changing out about 1/3rd of the tank volume.

Mike had maintained the seven fish in separate groups and unfortunately I had some attrition once I united the groups. A sub-dominant male was quickly killed off. The females, which had recently bred, needed conditioning. I pounded the food into the fish two to three times a day. Tilapia— which include Oreochromis tanganicae— are always hungry. Within a month, I had two females which were visibly swollen and looking good.

I noticed a female holding one morning and did not feed for that day. My experience has been that young females sometimes need to have temptation removed for a day or so to help them focus on brooding the eggs.

After eleven days, I netted out the female and stripped her of eighty, huge fry at the "bellywhomper" stage. I was very surprised by

I placed the eggs in a 2-1/2 gallon clear plastic container with a small sponge filter and just three days later the egg sack was only slightly prominent. I moved them to an established five gallon tank and the fry immediately began feeding on algae and detritus on the sponge filter. I fed the babies flake food and the occasional treat of live baby brine shrimp or microworms.

The fry grow very quickly and are voracious eaters like their parents. At only three weeks of age, they are 3/4 inch long.

Oreochromis tanganicae are not found at retail, but if available would likely not be expensive ($7 to $10 for juveniles).

Oreochromis tanganicae is primarily a fish for dedicated hobbyists with big tanks. There are hobbyist populations in the midwest and west coast, but an internet search might be the best way to located them.