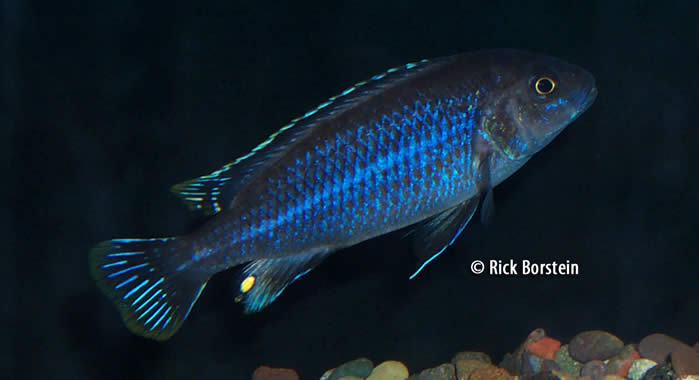 Melanochromis dialeptos, also known as P. "dwarf auratus", is a small attractive Mbuna first typed by Bowers & Stauffer in 1997. Like other Malawian cichlids, it is a mouthbrooder.

Note: We have published this fish under two erstwhile names: P. "dwarf auratus" and Pseudotropheus dialeptos.

Not much is known about the habitat of Melanochromis dialeptos. My guess is it is found around rocks and outcroppings. It seems to like small caves and rocks in the aquarium.

Melanochromis dialeptos does not require any special care. Water temperatures between 75 and 80F are good. Like other African cichlids, it likes hard water, although water in the neutral range is acceptable. Regular, partial water changes are always a good idea.

When I first got these fish, two females started spinning in a circle, mouth to tail, at high speed for over five minutes before one gave up--- and this was a soon as I dumped the bag of fish in the tank! It reminded me a little of the Tasmanian Devil in Bugs Bunny cartoons.

Don't keep them with similarly colored or shaped fish (conspecifics) as these guys might go after them. I kept mine with some Convicts (used as dither fish). Convicts themselves are very aggressive, but they were a good match for these fish.

I don't know what these fish eat in the wild, but in the aquarium they accept a wide variety of prepared foods. I recommend that you use at least 50% vegetable matter such as spirulina flakes. My fish also eagerly consumed Doromin (Tetra floating food sticks), cichlid flakes, pellets, etc.

I recommend having one male and several females if you want to spawn the fish. Two males in a tank with a fish this aggressive is problematic unless you have either-- 1) a really big tank or 2) lots of hiding places.

Provide a variety of flat slates, flowerpots (placed on their sides), and other hiding places for the fish.

A male will begin to court a female busily chasing away any other fish in the tank and then bring the female to the breeding location. Like other mouthbrooders, colors intensify in both fish at this time-- a sight to behold! Both male and female will clean the breeding location and begin spawning in typical Malawian fashion. The female will lay an egg then pick it up in her mouth. Next, the fish assume the "T" position in which the female bites at the male's egg spots fertilizing the eggs in her mouth. The largest brood I've seen is about 15 fry.

Females are pretty good holders and will retire to a hiding place in the tank. However, I usually remove the female to another tank to incubate the eggs. The fry will be free-swimming in about 20-22 days. I usually net out the fish after about 16 or 17 days and strip the female which, at that point, will only have a trace of egg sack remaining.

Newborn fry will take Cyclops-eeze immediately or baby brine shrimp. They look like miniature copies of the females-- stripes and all!

Within five days, you can transition to finely crushed spirulina flakes. The fry grow pretty quickly and even at three weeks will show the same aggressive behavior as the adults. Mean little suckers!

Juvenile fish are colorful and should be very saleable, too!

$3 to $6 U.S. for adults (recent price at a GCCA auction). Retail price here is confusing, since I've never found this fish in pet store.