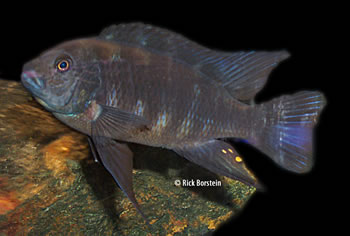 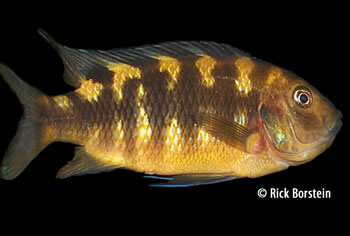 Psedotropheus crabro is an attractive and aggressive Malawian cichlid. It was first typed by Ribbink and Lewis in 1982 and imported shortly thereafter. It is a robust, thick, tough looking fish and it has a pugnacious reputation to match.

Many beginners buy this fish because the juveniles spot the attractive barred "bumblebee" pattern and, indeed, they are mighty cute. Fish this aggressive should not be sold to beginners, certainly not to those keeping a community tank. This fish should only be kept with other aggressive cichlids.

The coloration for adult, dominant males is near black and appear almost totally black when breeding. There are a variety of geographic variants of this fish; some males in breeding dress show several bright blue sparkles on their flanks which can be very pretty.

One thing the aquarist will notice with these fish is that they change color rapidly! Interestingly, males can change color to look almost exactly like the females and, in fact, females can quickly change color to a murky black. Why would did this fish adopt this color changing ability?

I found my answer in Ad Koning's book "Malawian Cichlids in the Natural Environment". Psedotropheus crabro inhabits caves in the lake that are also home to a very large catfish with which it shares a pseduo-symbiotic relationship. While in the gold and black barred configuration, this large catfish tolerates Psedotropheus crabro which picks parasites from the skin of the catfish.

Interestingly, the catfish are also cave spawners, exuding thousands of eggs which make a tasty snack for Psedotropheus crabro. When the catfish spawns, both male and female quickly change to a murky black color to steal the eggs. They then quickly change back to the "safe" barred configuration, somewhat like a cat burgler putting on black before entering a home!

The common name for this fish is the Bumblebee Mouthbrooder

As mentioned previously, Psedotropheus crabro inhabit large caves in the lake. These caves are found from 10 to 40M deep in the lake. This fish has been collected in water with a pH range 8.5 to 9.2 and dH range of 8.0 - 14.0.

Like all cichlids, regular partial water changes are critical. I changed approximately 40% of the thank volume on a weekly basis.

In the lake, Psedotropheus crabro feeds on fish parasites and variety of planktonic fare. My fish ate just about everything, however including Tetra Cichlid Sticks, Cichlid Flake, Aquadyne Duraflakes, pellets and more.

Typically, I recommend obtaining six or more juveniles and growing them up together. Since this fish gets pretty big, I would recommend at least a 50 gallon tank for these fish when mature.

My fish bred frequently, but I often didn't have successful spawns. My dominant male harassed the other fish in the tank relentlessly and females would often eat the eggs rather than holding them to term.

I eventually was successful by providing an increased amount of rockwork in my 100 gallon tank. I realized that if the male couldn't see the females, then maybe he'd leave them alone. With this in mind, I built a large file of rocks in the center of the tank that contained one large cave at the bottom. This pile extended almost to the top of the tank. The male quickly made his house in the cave at the bottom of the pile and could only see the other sides of the tank with great effort. Thus, he spent a lot less time bullying other fish.

The fish breed in typical mouthbrooder fashion in the T position. Males will darken to almost jet black and begin courting females after a water change. Males shake and circle to attract a female to a flat piece of rock where breeding ensues.

Psedotropheus crabro females will hold about 18 to 21 days in ideal conditions. I stripped my female at 18 days and got about 16 fully-formed fry that looked just like their barred mother. The fry grow incredibly fast, by the way! I started mine off on Cyclop-eeze.

You can expect to pay $2 to 4 for juveniles and $10 for adults. Psedotropheus crabro is readily available at pet stores.