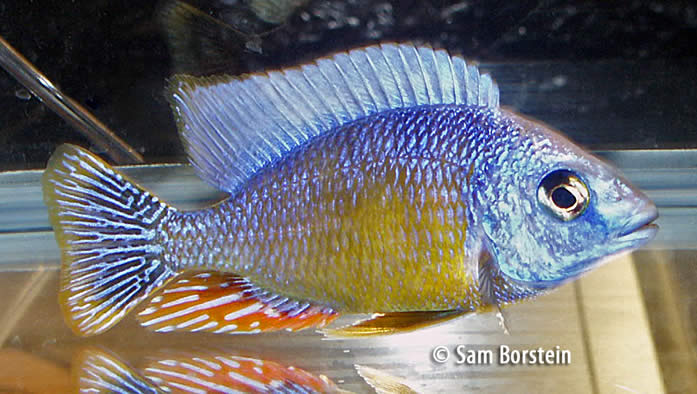 Protomelas sp. "Steveni Taiwan" (sometimes called Taiwan Reef) is a beautiful Lake Malawi mouthbrooder. This undescribed species of fish is named from the location where it is found— Taiwan Reef. No, it is not named from the Asian nation! The name actually comes from the local word "Taiwanee", meaning lost child. The other location points of this fish are Higga Reef, and Ngkuyo. There is an albino variety. Males top out at around 6 to 7 inches and females around 4.5 to 5 inches.

This fish is found in the rocky habitat of Lake Malawi.

Protomelas sp. "Steveni Taiwan" does not require special care. This fish is not overly aggressive towards others or their own species. Mine were kept in a community 75-gallon tank with mbuna, Tangs, Central American, and South American cichlids, and I had no problem. Water changes should be done weekly at 50%.

Protomelas sp. "Steveni Taiwan" is omnivorous and will eat almost anything. In the wild, algae is known to be a major part of its' diet, so a good quality veggie flake should be fed. I fed my fish HBH Graze, Spectrum, Tetra Cichlid Sticks, and Dianichi Veggie Deluxe.

Protomelas sp. "Steveni Taiwan" breed like rats! I received these fish from fellow GCCA member Irshad Khan. He said "All you really need is a male and female, water, and a breeding surface". He was right. They bred around two weeks after I got them which was also the only time I observed aggression when keeping this fish. The male will make it clear to the other tank inhabitants that that the whole aquarium is his "Breeding Territory" and will guard it feircely. The males are beautiful when not spawning, but when breeding are truly superb. Females hold for around 20 to 23 days before they release the babies.

Generally, however, I strip the fry at 12 to 14 days as I believe it is easier on the females

The fry are extremely small, but grow fast. Feed them newly hatched baby brine shrimp and they will get to about one-half inch in four to five weeks.

Protomelas sp. "Steveni Taiwan", when available at pet shops, run about $15 for juvenile fish. Expect to pay $25-$35 for full-colored males..

Protomelas sp. "Steveni Taiwan" is becoming more and more popular. You can easily get this fish from hobbyists, and possibly a local pet store. There is a new albino variety out, but you can expect to spend a lot of cheddar if you want them, as inch-long fish are 10-25 dollars each.