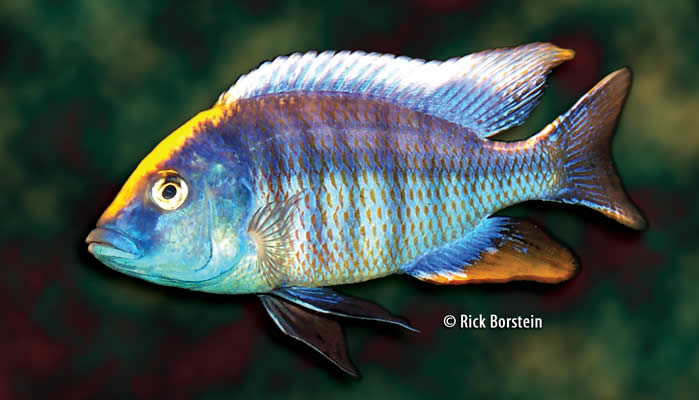 Try to find something about this fish on the internet and you'll kill a day or more!

Note: We originally listed this fish as Protomelas spilonotus "Mozambique". The "Mara Rocks" location is the correct one.

This fish has more aliases than Jesse James. Half of what you read is the truth and half is mistruth. The only problem is distinguishing between them!

This fish first came into the United States in the mid-seventies as the Sulfur-head Hap. The first time I saw this fish was at the home of Joe Annunziata, one of the co-owners of African Fish Imports in New Jersey. I immediately fell in love with this 8 inch fish and had to have some.

Joe said they only came in once (he had 4 males and 2 females) and that he wasn't parting with any. Over the next couple of years, African Fish Imports never got them in again and the fish kept getting larger and prettier. Every time I pleaded with Joe, he just smiled and politely said, "Sorry". By then they had started to spawn, but Joe was still reluctant to part with any.

I had just given up when Joe called me and asked if I still had any Albino Pseudotropheus zebra. He said a friend was looking for some and that he owed him a favor and really wanted some. After some haggling, Joe agreed to trade me a dozen of his prized fry for two dozen of mine.

To put this in perspective, this was 1977 and albino zebras were relatively new and were selling for $150 for a half a dozen 3/4 inch fish. The fish I traded Joe were 1 1/2 to 2 inches and were probably worth $40 each. So I traded approximately nine hundred dollars of fish for a dozen of this beautiful, yet little known fish at 1 1/2 inches. I told you I wanted them bad!

They grew fast and furious and by the end of a year they were 6-7 inches long and still silver with a black stripe. Shortly thereafter, they started coloring up. I lost one along the way and ended up with 7 males and 4 females. They were the pride of my collection! Males attain a size over 12 inches and the females not far behind. The male shown is about 2 years old. The sulfur colored blaze is almost, but not quite, at full color. A full blaze is a certain sign of a mature fish.

Protomelas spilonotus comes from Lake Malawi off the coast of Mozambique, around Cobue, although they can be spotted in other areas of the lake. They are almost always on Stuart Grant's price list but rarely imported. The main problem with this fish is size. They pack Protomelas spilonotuss six to a box so the shipping alone will run you $25-30 per fish. Add the price of the fish and you're talking big money.

Next, consider that they will send mostly or all males and it's almost impossible to get a wild breeding colony.

As with most African Cichlids, P. spilonotus is happy anywhere. Proper temperature, ph, hardness and weekly water changes of about 25% keep this fish happy and healthy.

Protomelas spilonotus likes hard alkaline water and a temperature of about 80 degrees F. They are relatively hardy and can stand extreme conditions. They love to dig, so give them plenty of gravel and plenty of caves or any other appropriate hiding place. The males are relatively non-aggressive, but remember they are cichlids-- not strangers to fighting.

You can house more than one male in a tank provided you have plenty of room. Until recently, my colony, consisting of 2 males and 4 females were housed in a 75 gallon tank, so I separated the males. They weren't fighting as much as one male was beating the females to heck. Also, as usual, use as many females as you can get or have room for. They have since been moved into a 125 gallon tank and everyone is living comfortably together.

Protomelas spilonotus, of course, are big eaters. They readily eat anything given them. As with all fish, you should feed a variety of foods. One oddity? Throw a goldfish or any other live fish in the tank and they won't eat them. I've, on occasion, seen them kill small fish but never eat them.

Protomelas spilonotus is like many Malawians is a maternal mouth brooder and a harem spawner. They have fairly large eggs, but not giant eggs. They will, once they learn to spawn (usually at about two years of age), have spawns as large as 75-100 fry.

Protomelas spilonotus is a remarkably inexpensive fish. They aren't considered a desirable fish because they are a large investment in time, such as Cyphotilapia frontosa. They take about a year to start coloring up and closer to two before they start breeding. At retail, fry should be under $15. Young adults will probably fetch closer to $25. Large males will sell for over $50 and jumbo males even higher.

Protomelas spilonotus is not a fish you will expect to find at the local pet shop. Ask your storeowner to find some for you. They are an incredibly beautiful large fish that is the centerpiece to any tank they are in. That is if you can find them. It took me 3 or 4 months to find out exactly what fish I was looking for (remember all the aliases) and then another 5 or 6 months to find them.