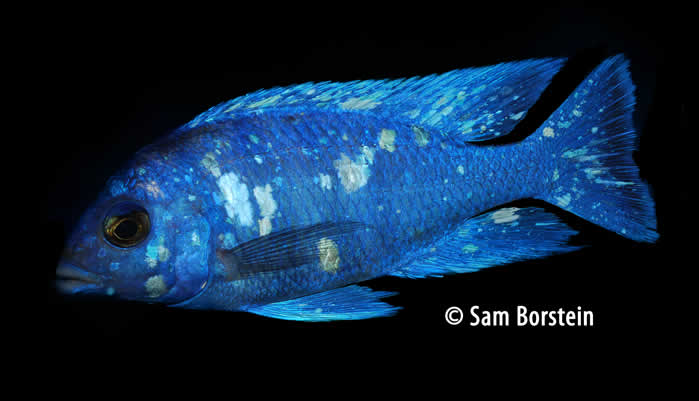 Placidochromis sp. “phenochilus Tanzania” is a beautiful, interesting, and undemanding Malawi Haplochromine. Placidochromis sp. “phenochilus Tanzania” is the closest thing to an OB Malawi Hap you’re going to see. Males are a gorgeous dark blue with nice contrasting metallic white blotches, giving them their common name, The Star Sapphire Cichlid. The colors of the fish only intensify with age and it is an impressive sight to see a full grown ten inch male with stunning colors. At around three inches, the fish turn solid blue and around four to five inches, they begin to get their spotting. Every male looks different and will have more or less white spotting than another. Females are generally smaller (six inches maximu length) and far less colored. The females are silver with a nice black throat, black barring, and a blue sheen. Females only get better with age and older females can develop a fair amount of blue.

Placidochromis sp. “phenochilus Tanzania” is found over open sandy areas in the Tanzanian part of Lake Malawi between Makonde and Lupingu.

Placidochromis sp. “phenochilus Tanzania” poses few problems when it comes to care. It is best to decorate the tank with a sand substrate and a few rocks. These fish are rather quite peaceful and only really squabble around breeding time. A midsized group of 5-7 could easily be housed in a 75 gallon tank. The fish do get large so a six foot tank is ultimately a better option. They can be kept with other fish and mix well with gentler mbuna and other gentler dissimilar Malawi Haps.

One caution regarding care. I've found Placidochromis sp. “phenochilus Tanzania” to be extremely sensitive to gas turbidity during wintertime water changes. When incoming cold Chicago water is rapidly heated during a water change, incoming water to the tank can be filled with millions of tiny microbubbles. These ultra-small bubbles enter the body of the fish and may be seen in the fins. Other bubbles enter the bloodstream of the fish which can cause damage to internal organs. One symptom is spiraling, whacked out behavior post water change. Instead, add water slowly during water change or age it first before adding to the tank. Deeper tanks pose large problems as it takes longer for the turbidity to decrease.

The Star Sapphire Cichlid has an extremely interesting way of feeding in the wild. They are a follower species, meaning they follow other fish who sift through the sand. In this case, the fish are Taeniolethrinops sp., a large sand sifting Haplochromine. Taeniolethrinops will sift through the sand looking for edibles. As they dig, various invertebrates are exposed from the sand sifting. In aquaria Placidochromis sp. “phenochilus Tanzania” readily accepts almost any type of prepared foods. A mixed diet of high quality flakes and pellets is best.

Placidochromis sp. “phenochilus Tanzania” is fairly easy. The fish will start to breed at around four inches long. The fish will excavate a small pit in which they spawn. The females are usually good holders and will typically hold to term, which is about three weeks. At this point I like to strip the female as the fry are free swimming or at least really close to free swimming. A spawn is usually around 20-40 fry. The fry are rather large and easy to raise. They grow quickly on baby brine shrimp or crushed flake.

The Star Sapphire Cichlid is a popular fish and may sometimes be seen at pet shops. This fish is not rare by any means and it is commonly available in the cichlid hobby.