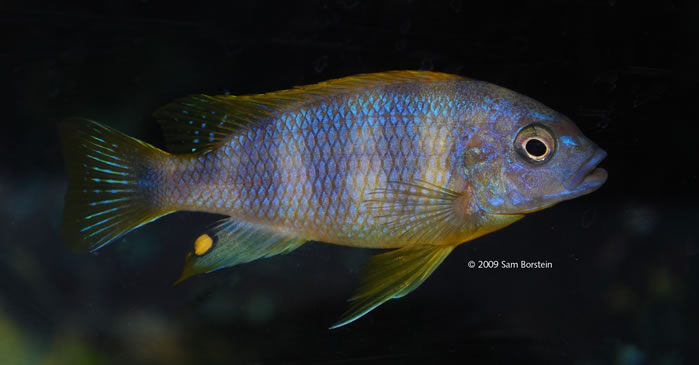 Petrotilapia sp. "chitimba" is mouthbrooding cichlid from Lake Malawi. This fish is one of the newer imports to the hobby and, as of this writing, there are numerous sources for this fish.

I suspect this fish will remain popular in the hobby due to its outstanding coloration. Males are vertically striped with an overcolor of purple-blue. The fins are bright yellow and there is a single large, yelllow egg spot. Females are also attractive, sporting the same barred pattern, but no blue overlay. On females, yellow coloration is confined to the edge of the dorsal.

Petrotilapia sp. "chitimba" is an active and moderately aggressive species, so house it with similarly dispositioned tankmates.

The location "chtimba" is named after a small village on the north shore of Lake Malawi, known for its long white sand beaches and clear water.

Petrotilapia sp. "chitimba" is found about 20M below the surface among sparse, flat stones over a sandy bottom.

Petrotilapia sp. "chitimba" are easy to care for and fast growing. Care is really no different than any other mbuna species. Provide hiding places for sub-dominant indivduals and maintain good water quality.

I have not heard of stomach content analysis for this fish, but I would wager that Petrotilapia sp. "chitimba" is primarily herbivorous, feeding on algae and aufwuchs grazed from the rocks.

I fed a variety of primarily veggie items such as HBH Graze and Dainichi Veggie Deluxe pellets.

My son Sam obtained a group of six of these fish as juveniles. Unfortunately, he had to run off to university before he had a chance to grow the fish up and breed it.

The fish were housed in a 110G tank with a sand substrate. Filtration was provided by three, large ATI sponge filters and water temperature was maintained at about 80F.

Tankmates were four Katria katria and a four Haplochromis nyeri.

As soon as the dominant male colored up, I observed courtship behavior. Shortly thereafter, in October 2009, the I observed the first female holding. I let the female hold for 12 days and stripped her of 24 wrigglers.

I fed the babies on microworms and baby brine shrimp and they grew quickly. I distributed some fry to the Circle City Aquarium Club in Indiana when I spoke there in early 2010.