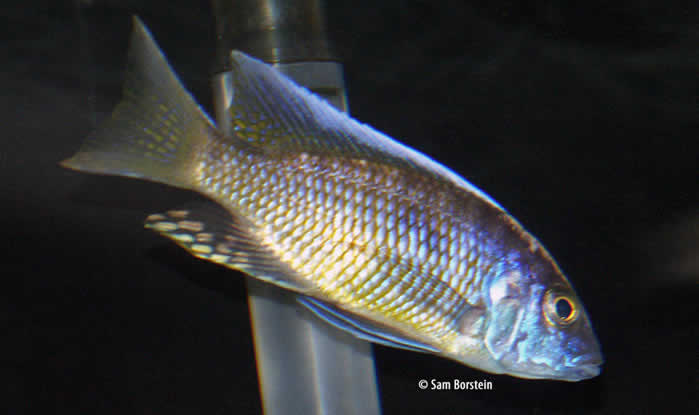 Otopharynx tetraspilus is a maternal mouthbrooding cichlid native to Lake Malawi, Africa. This fish was first typed by Trewavas way back in 1935, no doubt because it is easy to catch in the shallow waters it inhabits. This fish is widely distributed in the southern part of the lake.

Female Otopharynx tetraspilus have a tan-golden brown base with numerous markings. They are better looking than some Malawian females, but nothing to write home about.

Males get up to six to seven inches in length. Females are about one-third smaller.

This fish is not very aggressive. Males will chase females, but I have never seen any damage done. I have kept this fish with several more aggressive mbuna. It will hang out in the mid to top of the tank and avoid conflict. Despite not having the top position in the tank, the fish kept breeding. That, in itself, is pretty unusual.

The common name for this fish is Mloto Yellow Princess

Otopharynx tetraspilus are found in shallow water where vegetation is present. This habitat usually has a sandy bottom. Water in Lake Malawi is hard pH range of 7.4–8.4 and dH range of 7.0–30.

Otopharynx tetraspilus are easy to keep. I kept them in both a 55-gallon tank and a 90 gallon tank. Both tanks were quite crowded, but they easily made a home for themselves. Since this fish gets pretty big, I suggest a tank at least four feet in length.

My son Sam and I obtained a breeding group of one male and three females from fellow GCCA member Mike Helford. One female had a missing eye. We quickly named her "Patchy". Patchy never bred, but the male courted and bred with both of the other females.

Sam first bred this fish in his 55-gallon and turned them into GCCA's Breeders Award Program (BAP). I later had them spawn in my 90-gallon Tanganyikan tank.

My experience breeding Otopharynx species is that these fish only spawn every two to three months. They definitely are not on the same "lovin" schedule as most mbuna by comparison. For the most part, the males leave the females alone until they think the females are ready to breed.

I was not able to observe this fish spawning, but reportedly the female excavates a small depression in the sand where she releases her eggs. She picks them up in her mouth. The male presents his egg dummies which the female bites at he release sperm.

Females are excellent holders. I let the female hold for 12-13 days and then stripped her of 35 fry with just a trace of yolk sac.

The fry are large and ready to eat Cylops-eeze and baby brine shrimp immediately. The fry grow fairly quickly, but do not exhibit much color until they are nearly adults.

You will occasionally find this fish in pet stores, but it is far from common. Expect to pay about $12 for juvenile fish.

Otopharynx tetraspilus are definitely in the hobby and you can find them on several web price lists.