Above At left, 6-inch Nimbochromis venustus male. Below, a female. Photos by Rick Borstein 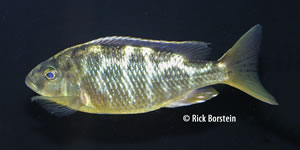 Nimbochromis venustus, a large Malawian mouthbrooder, was first typed by Boulenger in 1908 as Haplochromis Venustus. In 1989 it was reclassified into the species Nimbochromis by Eccles and Trewavas.

Nimbochromis venustus is closely related to Nimbochromis livingtonii. Both are popular cichlids reguarly found in pet stores. Nimbochromis venustus is sometimes called the Giraffe Hap because of the blotchy patches that appear on females (see photo at right) and sub-adult males. Males in breeding dress have a bright blue head and yellow-green sheen to the flanks partially covering the "giraffe" splotches. There appears to be quite a bit of difference between individuals depending on age, position in the hierarchy and the presence of breeding color.

The common name for this fish is the Giraffe Hap

Nimbochromis venustus is found over sandy areas in the lake at depths averaging 15 meters.

Nimbochromis venustus is fairly hardy and easy to keep. Like all Malawian cichlids, it appreciates hard water and temperatures of 76 to 80F. Nimbochromis venustus grows up to 10 inches; a group of six to eight adults would do best large tank of at least 100 gallons. Smaller specimens can be kept in correspondingly smaller aquaria.

Nimbochromis venustus is an ambush predator. It has been observed burrowing into the sand where it's splotchy coloration acts a camouflage. Because of this habit, provide a soft substrate of sand or fine gravel. A sharp substate combined with poor water quality can quickly lead to eye cloudiness in this fish which is impossible to reverse in my experience.

Like many predators that live in the sandy habitat, Nimbochromis venustus are strong and swift swimmers. I observed near constant schoaling behavior in the tank making for a very attractive display.

There are differing reports regarding aggression in this species. I have read reports stating that this fish is very aggressive toward both it's kind and conspecifics. This was not my experience; I would classify this fish as only moderately agressive.

I kept seven Nimbochromis venustus with a variety of other Malawian cichlids with only moderate aggression taking place. Individual fish do have quite different personalities, however, so keep on the lookout for aggressive behavior. When I added two fish purchased from a fellow club member, the newly introduced dominant male went aggressively after his forrmer tankmate. The fish were sold to me as a pair but were, in fact, a dominant and sub-dominant male. Cichlids always keep us guessing!

In the lake, Nimbochromis venustus is an opportunistic feeder. Much has been written about its habit as a paedophage (fry eater) where the ambush technique previously mentioned comes into play. Stomach contents have revealed, however, a variety of zoo plankton and other materials, so as you'd expect, this fish is easy to feed in captivity. I fed Tetra Cichlid Flakes, spirulina flakes, Aquadine Duraflakes, frozen brine shrimp and Tetra Cichlid Sticks. They are big eaters and will keep eating until they are quite plump!

Nimbochromis venustus is fairly easy to breed. The key components to success are

Although I never observed a spawning, reports I have read indicates that it proceeds similarly to that of Cyrtocara moorii.

Spawns are very large containing from 60 to 120 eggs. I found the females to be shy holders in my hectic 125 gallon tank, so I stripped the female two days post spawning and incubated the largish eggs for 13 days. The fry exhibit the female color pattern almost immediately and are quite robust eaters. I fed my fry on Cyclops-eeze for four days and then transitioned them to crushed flake food. Even at young age, they are strong swimmers. The fry grow quickly.

A few notes about breeding this fish

It is rare to find adult males available in stores, but when available, expect to pay $18-20 per fish. Juveniles, which are much more common, are $8-12. Nimbochromis venustus is widely available not only at your local pet store but in chain stores as well. It's on many wholesale lists, so ask your local store to order some for you if they are not immediately available. This fish is generally available at GCCA auctions and swap meets, so be sure to attend!