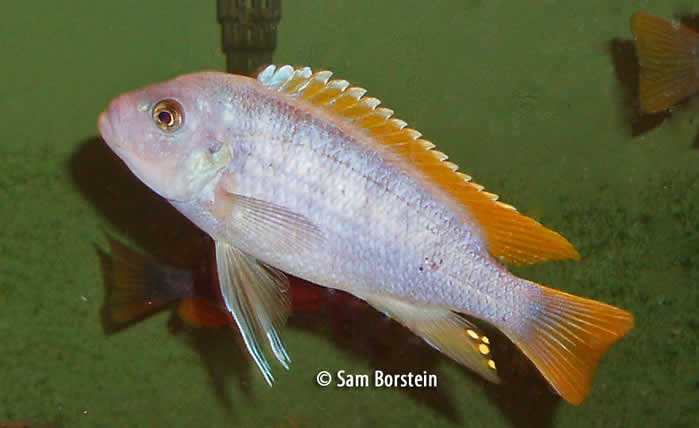 Metriaclima greshakei is a maternal-mouthbrooding, Lake Malawi zebra type that grows to about six inches. This fish was first typed by Meyer and Foerester in 1984. Metriaclima greshakei's common name— the Red Top Ice Blue— is descriptive. The male's dorsal fin being a vibrant bright orange and the general body color of the fish is light blue. Females are a drab brown-orange.

In Lake Malawi, Metriaclima greshakei is most common in the rocky zones of the southeast part of the lake.

Metriaclima greshakei is easy to care for. The fish is relatively aggressive and should be housed in a 75-gallon tank or larger tank with numerous hiding spots. This fish is very territorial and aggressive to conspecifics, but generally will leave other species alone. If given enough cover this fish is easily kept.

In the wild Metriaclima greshakei eats phytoplankton from the water column, but will gladly take veggie flakes, cichlid flakes and other prepared foods in the aquarium. We fed HBH graze, New Life Spectrum and Dainichi Veggie Deluxe. Like all mbuna, a significant portion of the diet should include vegetable matter. This fish can bloat if fed too much protein.

Metriaclima greshakei is a maternal mouthbrooder that is relatively easy to breed. Before spawning, the male brightened sop much that he was nearly white. The fish spawned on piece of slate in typical mbuna fashion.

After the first two spawns, the fish dropped or ate their eggs. I had heard that Metriaclima greshakei is a bad holder, which is surprising as most mbuna are reliable. Reports indicated that this fish lays about 30-50 eggs and hold for around 25 days.

I finally got fed up with the fish. The next time they spawned, I stripped the female after three days of ten eggs. I put the eggs in a 2-gallon, clear Rubbermaid hatching tank along with a small heater and a sponge filter. The water was extremely clean (90% new water) and cycled. After a ten days, the fry were free swimming and eating freshly hatched baby brine shrimp. They stayed in the little tub for a week until I moved them into a 10-gallon tank. The fry are easy to raise and good eaters.