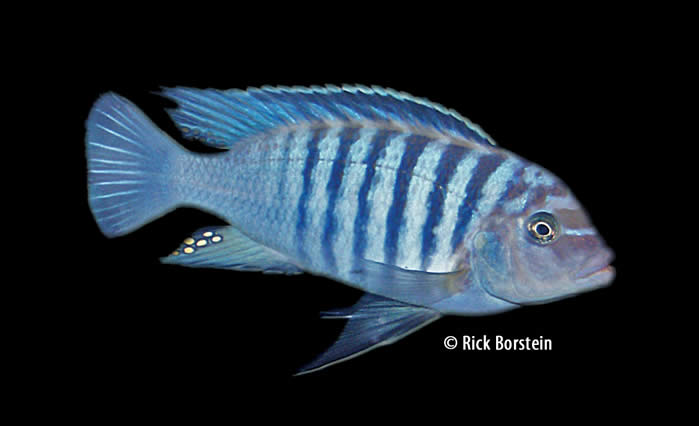 Above Metriaclima phaeos. Photo of male in breeding color by Rick Borstein.

Metriaclima phaeos was first typed in Stauffer, Bowers, Kellogg & McKaye, 1997, so it is a relatively recent introduction. Synonyms for this fish are Maylandia phaeos and Pseudotropheus phaeos. Like all other Metriaclima species, it is a maternal moutbrooder from Lake Malawi.

In latin, phaeo (pheo) means grey or dun-colored. According to Stauffer, males of most populations have a solid grey dorsal fin. I would suggest as a common name "Grey Dorsal Mbuna" but, unfortunately, not all variants known in the hobby have grey dorsals!

Unlike many other mbuna, this fish has little red coloration. To my mind, that's a nice change from the cookie-cutter red zebras which are so prevalent in the hobby.

Males get up to about five inches or so. Females stay a bit smaller at four inches.

My bright yellow fry make me think that is a possibility. Unfortunately, I sold all of my fry and the group before I found this out.

Metriaclima phaeos was first collected in Mozambique in the Cobue area in water 1 to 5 meters deep. My guess is that it is found closely associated with rocks.

Metriaclima phaeos is typical of the genus. Males can be aggressive to both sexes in a small tank, so I recommend at least a 55-gallon or larger tank. Like all mbuna, they do best in hard water. Regular partial water changes are important. I kept mine in a 125-gallon tank and did weekly, 50% water changes.

Do not mix mbuna species— Pseudotropheus, Metriaclima, Maylandia— in the same tank as they may interbreed.

I obtained a group of six, wild Maylandia phaeos from fellow GCCA member Mike Helford. The fish were in excellent condition and had already bred for Mike, so I considered these a slam-dunk BAP.

The fish were already full-grown adults which can be a bit more of a challenge to spawn. My experience is that juvenile mbuna are the easiest to breed. Adults seem to take more time between spawns and dominant male aggression can be a problem.

In my 125, aggression was mitigated by the space afforded the females and the other tank occupants. In about eight weeks, I spied a holding female. I allowed the female to hold the babies for 14 days at which time I stripped her of 55 large fry at the heads and tails stage. I move the babies to a clean 2-gallon container and six days later they were free-swimming.

The fry are bright yellow and retain that coloration until almost 1.5" in length.

Metriaclima phaeos is not commonly available at retailers. I would guess that prices for juveniles would be in the $10-12 range.

Metriaclima phaeos is sporadically available in the hobby on import lists.