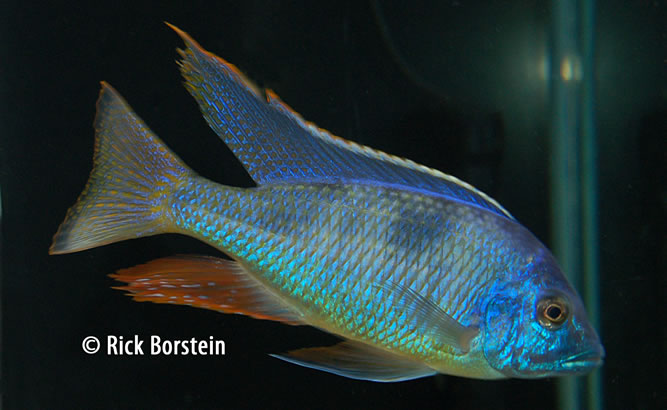 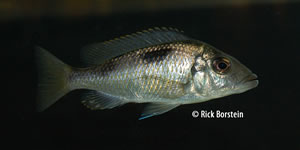 Hemitilapia oxyrhyncha gets large and the common name "Giant Hap" is an apt one. Males get up to about 9 inches. Females stay quite a bit smaller, probably topping out at six inches.

Females (Right) have an tan-grey background with some large spots high up on the back.

Hemitilapia oxyrhyncha is an aggressive hap. As expected, males will fight with males, but it is not unusual to see females jaw locking, too.

I do not recommend keeping Hemitilapia oxyrhyncha with Malawi Peacocks (Aulonocara species). My experience is that they will harass conspecifics.

Hemitilapia oxyrhyncha is found throughout the lake, often closely associated with sandy-bottomed locations.

Hemitilapia oxyrhyncha are easy to care for, but a large tank at least six feet in length is recommended. They are fast swimmers which do not like to be crowded. Water conditions are identical for other Malawi cichlids . . . hard and 76 to 80F..

According to Fishbase, Hemitilapia oxyrhyncha "Inhabits sandy bottoms with swards of Vallisneria. Feeds by scraping epiphytic algae from the leaves, grasping a leaf in its mouth and working along it." Stomach content analysis included a lot of plant material. I suggest a balanced diet which includes lots of vegetable matter.

I fed a variety of foods such as Dainichi Veggie Deluxe, HBH Graze, HBH Soft and Moist Veggie and the occasional treat of frozen Bloodworms.

I obtained a group of two male and three female F0 (wild) Hemitilapia oxyrhyncha from fellow GCCA member Mike Helford. Mike is often the first one in our club to get oddball Malawians. Fortunately, I had a trio of another oddball Malawian to trade to him (Mylochromis laterstriga) and soon the deal was done.

At the time, the dominant male was about six inches long. The males grew well, but it was a struggle to fatten up the females. To get the females in condition, I fed frozen bloodworms and a high-quality flake. I noticed the wild females rejected larger foods presented to them.

I held the fish for about six months before they bred for me. As an aside, I find the larger Malawian Haps do not reproduce nearly as often or as readily as Peacocks and Mbuna, and therefore are more challenging.

On December 20, 2009 I noticed a female holding before leaving for vacation.

Fortunately, when I returned a week later she was still holding like champ. On January 3, 2010, I netted out the female and stripped her of 28 large, 3/8 inch, golden-colored babies which still had a bit of an egg sack. By January 6, most of the egg sack had disappeared and the fry immediately were able to take baby brine shrimp.