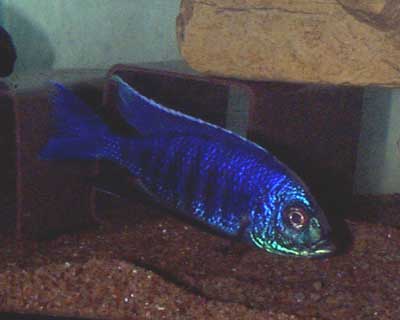 This fish has just recently been introduced into the hobby. It is being exported from Lake Malawi by African Diving Ltd. of Sweden. Although they are predominantly an exporter of Tanganyikan fishes, they do export Malawian fishes also. To my knowledge, African Diving Ltd. is the only company exporting this fish to the U.S. and by the looks of this fish, they have a winner. It is presently grouped together with "mloto" type fish because of it’s overall appearance, although the name given this fish will probably change in the future. Given the color of this fish, it is aptly named "Fluorescent". It is one of a small handful of African Cichlids that have green pigmentation. As you can see by the photo, this fish has an iridescent green head and a blue body. Note This picture was taken hours after arriving from Africa. A better picture can be found at African Diving Ltd.’s website under "New Discoveries". This iridescent green is mindful of the color sometimes seen on Bettas and Guppys, but a rare commodity in African Cichlids.

The common name for this fish is The Mloto Fluorescent Mouthbrooder

This fish is found and collected at Hai Reef in Tanzania. According to African Diving Ltd, "It is a rare cichlid that may be found in sediment rich biotope where rocks meet the open sand floor. Females gather together in small groups seeking plankton some meters up from the bottom." Being this is a new fish in this country, some things must be assumed from other fishes of this type. From the colony that I have, I would say that they are semi to non aggressive with males attaining a length of 5-6 inches with females being slightly smaller.

Copadichromis. sp. "mloto fluorescent" require no special care. They, of course, love hard alkaline water with a temperature range of 74-84 degrees. A mixture of 2 parts non-iodized salt to 1 part Epsom salt will aid in digestion and prevent bloat. I use about 1 ounce of this mixture for every 15 gallons for water.

I feed these fish the same as everything else in my fish room. They are truly typical wild fish. Let a finger stray into the tank and they’ll try to eat that too. It’s amazing how quickly they adapt to dependency on humans. They are always the first ones scurrying about they tank waiting for food when someone enters the room. (Guess they read about Pavlov’s dogs.) I haven’t found a food that they won’t eat. At present, they have accepted frozen brine shrimp, earthworms (their favorite), bloodworms, pellets and assorted flake foods. I do make sure that they get a little more green matter, in the form of Spirulina, than some of my other fish.

I would presume it to be non-earth shattering news to declare that this fish is a mouth brooder. I have 2 males and 6 females in a 50 gallon breeder tank that has a variety of hiding places. This colony only arrived 2 weeks ago but from observation, the 2 males are typically territorial yet atypically not out for each other’s blood. They get along well, although it goes without saying, that 1 male is boss. Both males do however show equal coloration. They are fattening up nicely and I am starting to see signs of eminent spawning. The males are chasing the females, yet not one of the females shows any outward signs of being attacked.

As with any new fish, they are moderately pricey. Although, I will say, I have seen and paid a lot more for new fish.