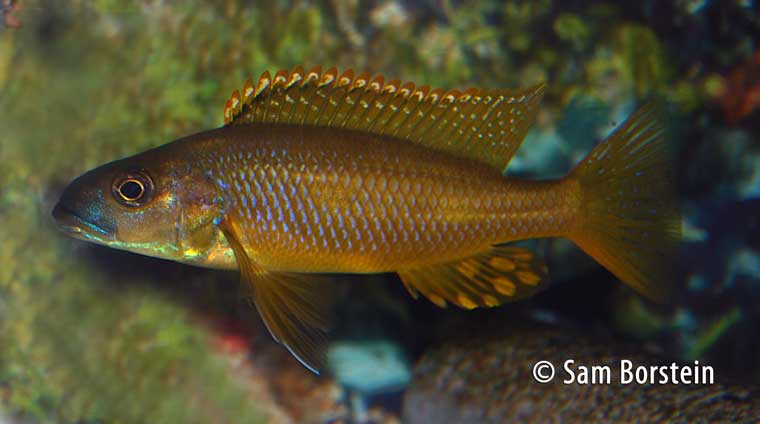 Exochochromis anagenys a elongated, large predatory cichlid from Lake Malawi which was fairly recently typed by Oliver in 1989. A common name for this fish is the "Three Spot Torpedo", a fitting description. It is a mouthbrooder like the vast majority of Malawi cichlids.

Sub-dominant males, females and juveniles have a golden yellow background with three dots along the flanks. Males from the northern part of Lake Malawi get a blue face and some specimens will exhibit nearly completely blue flanks. Specimens from the southern portion of the lake are more silverly in color. I've never seen the latter in the hobby.

Exochochromis anagenys gets quite large with males getting close to a foot long. Females stay smaller at perhaps a maximum of eight to nine inches.

Despite its predatory nature, Exochochromis anagenys is not a very aggressive fish in the aquarium.

Exochochromis anagenys is found in the sediment free rocky habitat of Lake Malawi. 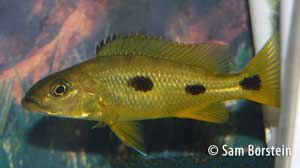 Exochochromis anagenys gets large and for that reason a large tank is required. Juveniles may be raised effectively in a 40 breeder, but adults should be kept in a 6-foot or longer tank. I kept mine in standard Chicago water which is quite hard (pH 7.4-7.6) and about 300 ppm hardness and they did fine. Regular partial water changes are necessary for the health of this fish (and really any other cichlid). I performed water changes equal to 25% of the tank volume weekly.

Be mindful when choosing tankmates for Exochochromis anagenys. This fish is capable of swallowing some pretty big prey. As previously mentioned, Exochochromis anagenys is not very aggressive. I kept mine with Taeniolethrinops laticeps, a mild-mannered oddball Malawian cichlid and it turned out to be a good match. 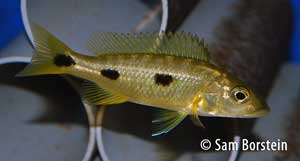 Exochochromis anagenys is not the easiest fish to breed only because it needs to be large, you need big tanks and it does not appear to spawn that often.

I obtained eight 1.5 inch fish at the 2009 ACA Convention in Milwaukee. I really love yellow cichlids and Exochochromis anagenys certainly fits the bill. There was a spectacular, large male Exochochromis anagenys in the show that year and checking out this impressive specimen certainly cemented my desire to obtain the fish. I think I paid about $40 for the group.

The young fish cycled through a progression of increasingly larger tanks over about 18 months. At the end of this period, the largest male was approaching eight inches in length and coloring up nicely. Soon, I found a female with a very large mouthful of eggs. I let her hold two week and stripped her of seven very large fry at the heads and tails stage.

The heads and tails fry are enormous . . . just about an inch long. These are some of the largest Malawian fry I've seen!

About ten days later, the fry were free swimming and looked just like miniature copies of their parents.

Adult Exochochromis anagenys can be very expensive. I've seen full-grown adults sell for $75. Juveniles, when available, are much more affordable. Two-inch long specimens are usually available in the $10 to $15 range. While Exochochromis anagenys is by no means a common fish in the hobby, you can usually find it on wholesalers lists without too much problem.