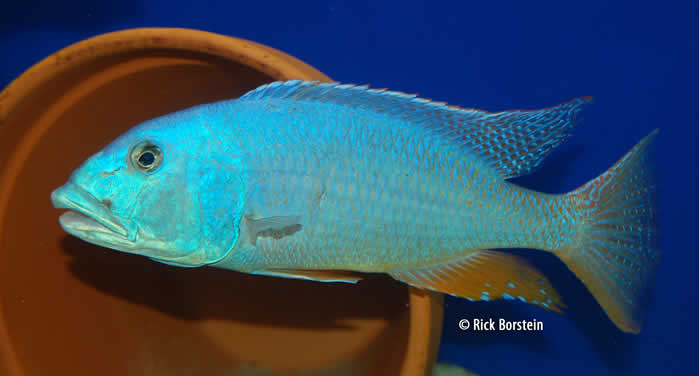 Aristochromis christyi (Trewavas, 1935) is a large, predatory mouthbrooding cichlid from Lake Malawi, Africa and the only member of its genus. Males get up to about a foot in length. Females stay a couple of inches smaller.

When viewed from the front, Aristochromis christyi is laterally compressed.

This large Malawian is impressive in the right sized tank. Aristochromis christyi are not particularly aggressive to each other, but it will readily eat any other fish that it can fit in its mouth.

In Lake Malawi, Aristochromis christyi is most often found cruising the area between the sandy and rocky portions of the shoreline at depths from 6 to 33 feet. This fish is found throughout the lake, but is uncommon.

Aristochromis christyi is not difficult to keep, but large tanks at least six feet in length are required. This fish spooks easily, so keepers should avoid sudden movement about the tank. I kept mine in regular Chicago water (pH 7.4) at 78F with no problems. Because these are large fish and somewhat messy eaters, pay special attention to water quality. They do best with a 50% water change at least every two weeks.

This fish does well in groups six to eight. If possible, get one or two males and several females.

GCCA member Mike Helford had a group of eight, adult Aristochromis christyi and I was lucky enough to obtain four. Unfortunately, my group was comprised of three males and one small female. I placed the fish in a 110 gallon tank filtered by two large sponge filters and a couple of internal power filters. The tank had a sand substrate and a few flowerpots.

The male to female ratio was not ideal, and the small female was looking worse for it. Fortunately, the other recipient of the Aristochromis christyi was running out of tank space and I obtained the rest of the group. The newcomers— one male and three females, was just what I needed.

Getting females into condition can be a challenge with this fish. I found twice-daily feedings did the trick. The occasional treat of feeder fish also seemed to help the females "get in the mood".

A dominant male developed, but I never saw him chase or molest the other males in the tank. The dominant Aristochromis christyi excavated a large pit in the sand and displayed to the females. I was not able to observe a spawning, but presume it took place in the pit area.

One day, after a feeding of some spare Gambusia affinis fry the previous day, I observed a female holding. I allowed her to hold for about ten days and then made a mistake. I offered the fish some more live feeders. The tempation was too great for the female. She swallowed her eggs and then gorged on the feeders.

Shortly after, I found two other females holding. I continued to feed the fish dry foods and I noticed that occasionally females would ingest some of the small food particles in the tank.

It can be difficult to tell exactly when the females are holding, so I'm not sure precisely how long the females held. I stripped one female of 28 very large, one-half inch long free-swimming fry. I stripped the other holding female of about twenty eggs at the heads and tails stage. Curiously, there were also ten or so infertile eggs.

Stripping a fish of this size can be challenge, which is why I had my son Sam do it. He was spined and also bit by the female who managed to embed a small tooth in his thumb!

Aristochromis christyi is occasionally found in pet shops that specialize in cichlids. Expect to pay upwards of $50 for adult fish. 1.5" juveniles are occasionally available in the $10 to $20 range.