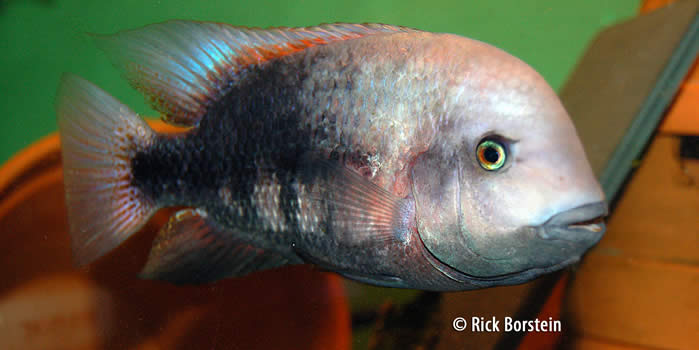 The common name derives from the name of the type locality for this species which is Presa de la Angostura in Chiapas, Mexico. In Spanish, presa=dam and angostura=narrows.  Mexico's largest hydroelectric dam is located there.

Paratheraps breidohri is a substrate-spawning cichlid, like the other ten (or so) members of the genus. One trait that all Paratheraps possess is horizontal bar that runs from the base of the pectoral fin to the base of the tail. That is easiest to see when the fish is in its mating coloration.

Like other members of the genus Paratheraps, breeding coloration is dramatically different. The entire lower half of the female turns jet black. Males likewise darken considerably.

Non-breeding coloration is difficult to describe. The face of the male has a greenish cast and a rosy pink blush following the front part of the fish. The flanks are mostly grey with black and gold flecks. The fins are banded with metallic orange and red. There is a nice picture of non-breeding coloration on the Cichlid Room Companion.

Paratheraps breidohri is a robust tankbuster that seldom tolerates con-specifics. It needs a big tank! Males probably approach a foot in length. Females stay a couple of inches smaller.

According to Fishbase Paratheraps breidohri is found on on Atlantic slope of Central America in the Grijalva River basin. The fish " . . . inhabit[s] lower to middle river valleys as well as lakes. Found over rocks, sand, silt, or mud. " Water parameters where Paratheraps breidohri occurs are a pH of about 7.5 and temperatures of 75–80F.

Paratheraps breidohri is a hardy fish, provided you provide clean water and can deal with aggression. Fry and juveniles may be kept successfully in groups, but aggressive tendencies start when this fish reaches 5–6 inches in length. You'll need at least a 75-gallon tank to keep this fish and an excellent filtration system as they are messy. Regular partial water changes are required. I changed about 50% weekly. I suggest breaking up the sightlines of the tank vertically so that dominant individuals cannot easily spot smaller tankmates. Provide hiding places such as appropriately sized terracotta tubes.

Aggression can be sudden and devastating. Sub-dominant males will be the first targeted. Remove them immediately or they will not survive the violence.

Pair bonds are fragile. Do not count on a pair to happily coexist for long periods of time.

Paratheraps breidohri is likely an omnivore, but other members of the genus show a strong preference for vegetable matter. My fish were easy to feed. I offered Tetra Cichlid Sticks, Algae wafers, Dainichi Veggie Deluxe and Spectrum Cichlid pellets.

I obtained six, 1.5" Paratheraps breidohri juveniles at the 2007 ACA Convention in Sacramento, CA. I placed the juveniles in a 90-gallon tank with a sand substrate. Filtration was via a TidePool II wet/dry filter and 50% weekly water changes were conducted. The fish grew fast and at eighteen months the largest, most dominant male exceeded seven inches. Tankmates were some large Blue Acara and a couple of Pungu maclereni. Up to this point, there was mostly chasing and display that did not lead to any damage.

Then, suddenly, the killing started.

Breeding most any large, Central American cichlid is challenging. Once the fish get "spawny", the dominant male will start picking off less dominant tankmates. This behavior can be difficult to stomach for some. In the wild, of course, less dominant individuals can just swim away.

Over a couple of weeks, I removed (or the dominant male killed) every other fish but one nice looking female, a sub-dominant female, a single terrified pleco and the two Pungu.

Eventually, that left the male with two females. The male put a beating on the most dominant female, but eventually the pair seemed to get along. The female changed to spawning colors— grey top, black belly— and she spawned with the male on the side of a terracotta pot. The eggs hatched in about three days. Curiously, the male didn't change color until the fry were free-swimming. However, once he did, the other female in the tank was killed in short order.

The female moved the babies to several pits dug in the sand. I started feeding baby brine shrimp and fry grew fairly quickly. My son observed the fry feeding off the side of the female. Interesting!

I left the pair with the fry for three weeks with no problems. Geting nervouse and fearing the worst, I gave the pair out to Ric Perez, a fellow GCCA member who loves Central American cichlids.

It's highly unlikely to find Paratheraps breidohri in a pet shop, but if you did expect to pay $9 to 12 for juvenile fish. This species is difficult to find in the hobby, although of late it has appeared on a few lists on the internet.