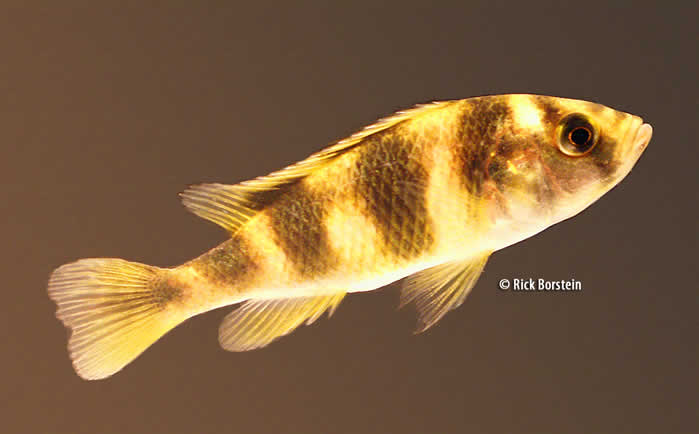 Above Female Astatotilapia latifasciata. Photo and retouching by Rick Borstein.

This fish is considered "threatened" in the wild according to the ICUN. Fortunately, Astatotilapia latifasciata has quite popular in the hobby and it is commonly available.

According to references I have found, there is quite a bit of variation in the appearance of this fish. Bars vary from brownish to black and the underlying background color varies from creamy yellow to golden. Poor fish exhibit uneven bars or blotches. Larger males may exhibit a red blush on the breast portion. Occasionally, Astatotilapia latifasciata is confused with Haplochromis sp. "44" as males of that species also have red on the breast. I have observed large males without any red on the breast, but with a blue sheen on the face and gill covers.

As I researched this fish on the internet, it occurred to me that maybe these are two different fish! For now, however, I will stick with the Astatotilapia latifasciata nomenclature.

Males top out at about five inches; females are somewhat smaller at 4 inches maximum length.

Astatotilapia latifasciata is an easy to feed, hungry fish. In the wild, these fish are insectivores. In the aquarium, they will stuff themselves with just about anything. I fed cichlid flake, spirulina flake, pellets, mysis shrimp and plankton. Be careful not to overfeed.

First of all, provide a good-sized tank and a flat stone or slate for breeding.

I obtained six juvenile Astatotilapia latifasciata from fellow GCCA member Ric Perez and placed them in a 125-gallon tank. My fish did not display aggression and got along peacefully with Pseudotropheus tropheops and other mbuna. The fish grew fairly quickly, but no spawns. Why?

According to GCCA member Sam Miller, and confirmed anecdotally with other members, males of this fish are hard to find. One member hypothesized that sex determination may be tied to the temperature of the spawning tank and/or hatching tank.

Did I have all females?

I later obtained a group of four fish (1M, 3F) from GCCA member Peter Ziolkowski. One of the fish I got from Peter, the male, was much brighter and had a slight blue sheen in the gill area. Within three weeks, I had my first spawn from a 3-inch female.

Astatotilapia latifasciata are excellent holders. I left the female in the main tank for 10 days and later stripped her of 22 fry. At this point, the fry still had their egg sacks, so I "tumbled" the babies in a commercial egg tumbler. At 20 days, there was only a bit of yolk sack, so I removed the fry and placed them in a 5-gallon grow-out tank.

At five weeks free-swimming, my fry are 3/4" long and ready to be BAP'd.

Astatotilapia latifasciata are not expensive. Expect to pay about $6-8 for young fish. Astatotilapia latifasciata can sometimes be challenging to locate, especially good specimens with clear stripes. You can find it at various Pet supercenters (usually sold as Haplochromis obliquedens). I even saw some at my local Walmart. That said, be careful. Make sure the fish you buy are well formed and have nice, even bars.