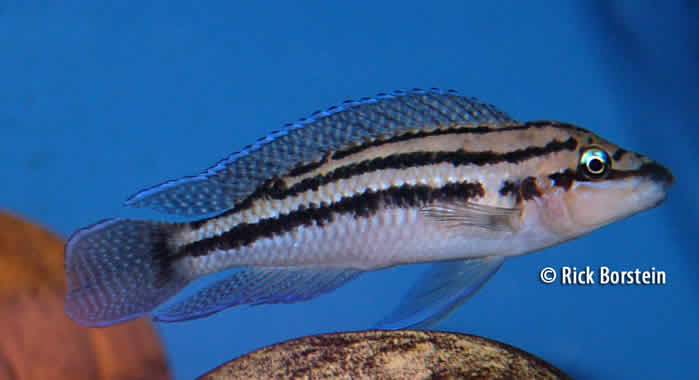 Julidochromis dickfeldi was first typed by Dr. Wolfgang Staeck in 1975. This slender, African fish native to the southwestern area of Lake Tanganyika in Africa. This attractive fish is a secretive cave spawner with interesting brood care. The parents will raise several generations of babies together and are great Moms and Dads.

It's extremely difficult, if not impossible, to distinguish the sexes of this fish. I believe, and a number of sources confirm, that the females are generally the larger fish.

Julidochromis dickfeldi don't get very big, only about 3 inches or so, so you could consider this a dwarf cichlid. They are well suited to smaller tanks because they maintain rather small territories. This is an attractive cichlid that is well worth trying!

Males are generally quite a bit larger than the females and a bit more brightly colored.

Julidochromis dickfeldi are found in biotopes containing rock and rubble. Generally speaking, these fish don't move around much once they stake out a territory. You will certainly observe this behavior in the aquarium. Native waters for this fish are very hard- - pH range 8.5 to 9.2 and dH range 8.0 to 12.0.

Julidochromis dickfeldi don't like soft water, but they will do fine in neutral or moderately hard water. I bred several generations of these fish in pH 7.0 water with 200 ppm hardness. Some early cichlid references inaccurately state that Tanganyikans are intolerant of water changes. This is simply not true! I change 50% of the water weekly with no problems at all.

Julidochromis dickfeldi does not need a very large tank. I kept five adults and many babies in a standard 20 gallon tank. I suggest a fine gravel for the bottom of the tank and lots of rockwork to simulate caves and hiding places. Julidochromis dickfeldi is territorial, but with the proper tank set-up you can easily limit it. An interesting thing about this fish is that really doesn't move around outside of its territory. My pair never ventured from their half of the twenty gallon tank.

Julidochromis dickfeldi will act aggressively toward conspecifics, so don't keep it with any other julies. I suggest a species tank for this fish.

If you look at Julidochromis dickfeldi, you'll notice the downward pointing mouth. In the lake, these fish graze on crustaceans and other small creatures found on the rocks. This is not a fish that will rush to the surface when you feed them! They'll stay within a couple of inches of the bottom and peck at food as it floats down. My fish accepted a large variety of prepared foods such as flake, New Life Spectrum pellets, bloodworms, etc. The adults also relish Cyclops-eeze, so I fed it several times a week.

Julidochromis dickfeldi isn't difficult to breed, but some patience is required for two reasons

I suggest that you obtain six to eight fry or juvenile fish and grow them up together.

At one year, Julidochromis dickfeldi will start pairing off. If you've provided rockwork and caves, you'll notice a pair drive away other fish from their territory. After a month or so of "decorating" their new home, excavating gravel, etc., the fish may breed. You may notice increased activity within the cave, and one of the fish may rarely come out because it is guarding eggs. In my case, this was the smaller fish which I believe was the male.

The eggs are laid on the roof or side of a cave almost always out of view. I believe the fish lay between 30 and 100 eggs, but I never knew for sure. The babies are very small when born, and initially feed on small organisms present in the aquarium. I had the best success feeding Cyclops-eeze whenever I noticed breeding activity, even if I wasn't sure that the fish had spawned. I am sure you could feed baby brine shirmp and get better results.

One of the great things about Julidochromis dickfeldi is that the juveniles will help raise succeeding generations of fish. At one point, I had five generations of babies from 1/8th inch long up to about 3/4 of an inch long. The fry have an interesting habit of hanging motionless, orienting themselves vertically or horizontally to match the rockwork. From a distance, I would imagine that they would look like tiny cracks in the rock. Perhaps this is an adaptive evolutionary behavior?

Julidochromis dickfeldi fry grow very slowly taking about four months to reach one inch in length. Fry are easily damaged by rough netting, so be especially careful when you move them.

This fish is widely available from wholesalers, so ask your pet shop to order some for you. It is occasionally available at GCCA meetings. Ask around at one of our meetings and somebody probably has some.